There are several expeditions that are dedicated to observing wildlife in the ocean pack ice, in particular the search for Polar Bears. I am working on three ships with voyages from 7 to 10 nights (see each ship’s schedule). On every cruise, we spend at least two-thirds of the time in the pack ice in search of wildlife. On these special cruises you find me from the early morning until late evening on the bridge, or above the flying bridge deck, scanning for bears. The long daytime hours in summer allows for much observation! When a sighting is made, I work with the captain to navigate the best course to safely track the bears without disturbing them, anticipating the direction the bear is heading. When we “work” a bear we “invite” it to come closer and check us out. We would never follow Polar Bears in the ice; the bears have to decide whether they are curious enough to come closer or not.

Although with declining sea-ice extent, past experience is critical to finding the bears—I use satellite imagery, the latest sea-ice reports, weather conditions and forecasts, and must anticipate changes in these variables. In the ice, we constantly reposition the ship in order to trace bears, without disturbing them….please read on….

The Polar Bears of Spitsbergen belong to the Barents Sea sub-population and is the only population in the Arctic which has not been hunted since Polar Bears were given protection in the early seventies. As a result, in the last 28 years I have clearly seen a change in the Polar Bear’s behavior around Spitsbergen. The bears (and other wildlife) have become habituated to ships and small boats as ecotourism increased in this region and they demonstrate reduced fear. Some rightly describe this archipelago, as the “Galapagos Islands of the Arctic.” 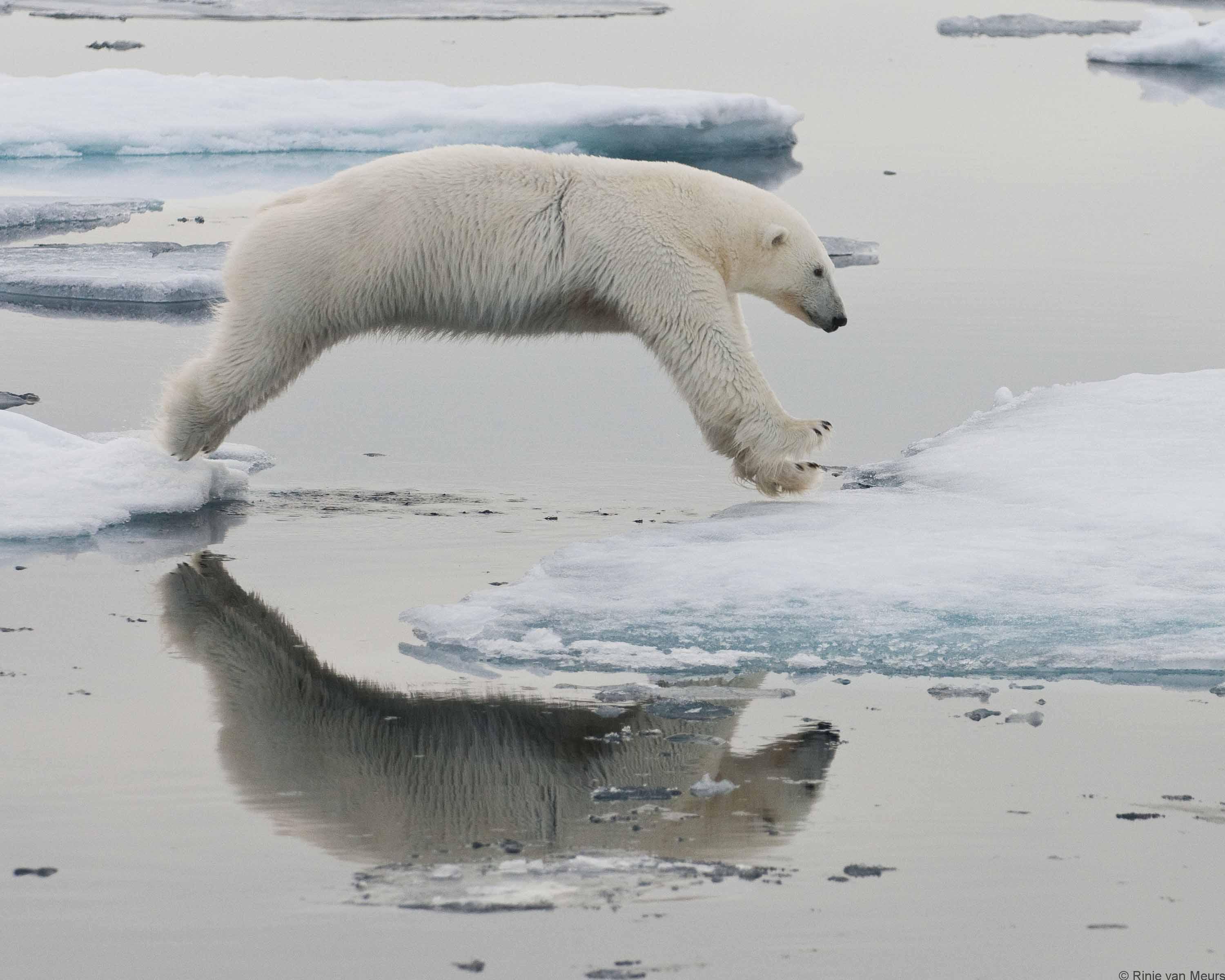 On our voyages, we also encounter other inhabitants of the sea ice such as, Walruses, Bearded Seals, Harp Seals, and Ringed Seals. Numerous bird species make a living in the ice as well. When cruising through the ice we are accompanied by Thick-billed Murres, Black Guillemots, Dovekies, Glaucous Gulls and the elusive Ivory Gull. As we push through the ice with the ship we expose the fish beneath it, like the Polar Cod. The Kittiwakes (a small gull) have learned to take advantage of this, and we see constant diving around the ship!

Also, we are planning landings and zodiac cruises as well. Landings are a welcome opportunity to stretch our legs after spending some time on the ship. This gives the passengers the chance to see other wildlife such as grazing Spitsbergen Reindeer (Caribou), Arctic fox, and along beaches the Walruses. One or two massive sea bird colonies are on our schedule as well, not to mention the spectacular scenery which surrounds us as we travel through the Arctic landscape.

We are operating at around the 80° north latitude, along the 80th parallel where the weather is usually stable in the summer. Especially when navigating in the ice there are no waves or swells, so we normally have a smooth sea which makes travelling comfortable. We keep the sailing schedule flexible, and allow the sea ice, the weather, and wildlife sightings to decide where we go and what we do. These are expedition cruises in the true sense of the word. During the day a team of lecturers give Arctic related presentations on history, wildlife, geography, or photo workshops. Cruising through the pack ice is not only a spectacular experience but it’s an educational experience to boot!

In late evening we usually stop the ship and let her adrift so that everybody can have a good night rest as cruising through the sea ice is a noisy operation. Next morning it is an experience to wake up and to find yourself surrounded by pack ice as far as the horizon stretches! Soon the engines are fired up and we’re on our way again, anticipating the encounters that lay ahead of us.